People Are More Than A Resume 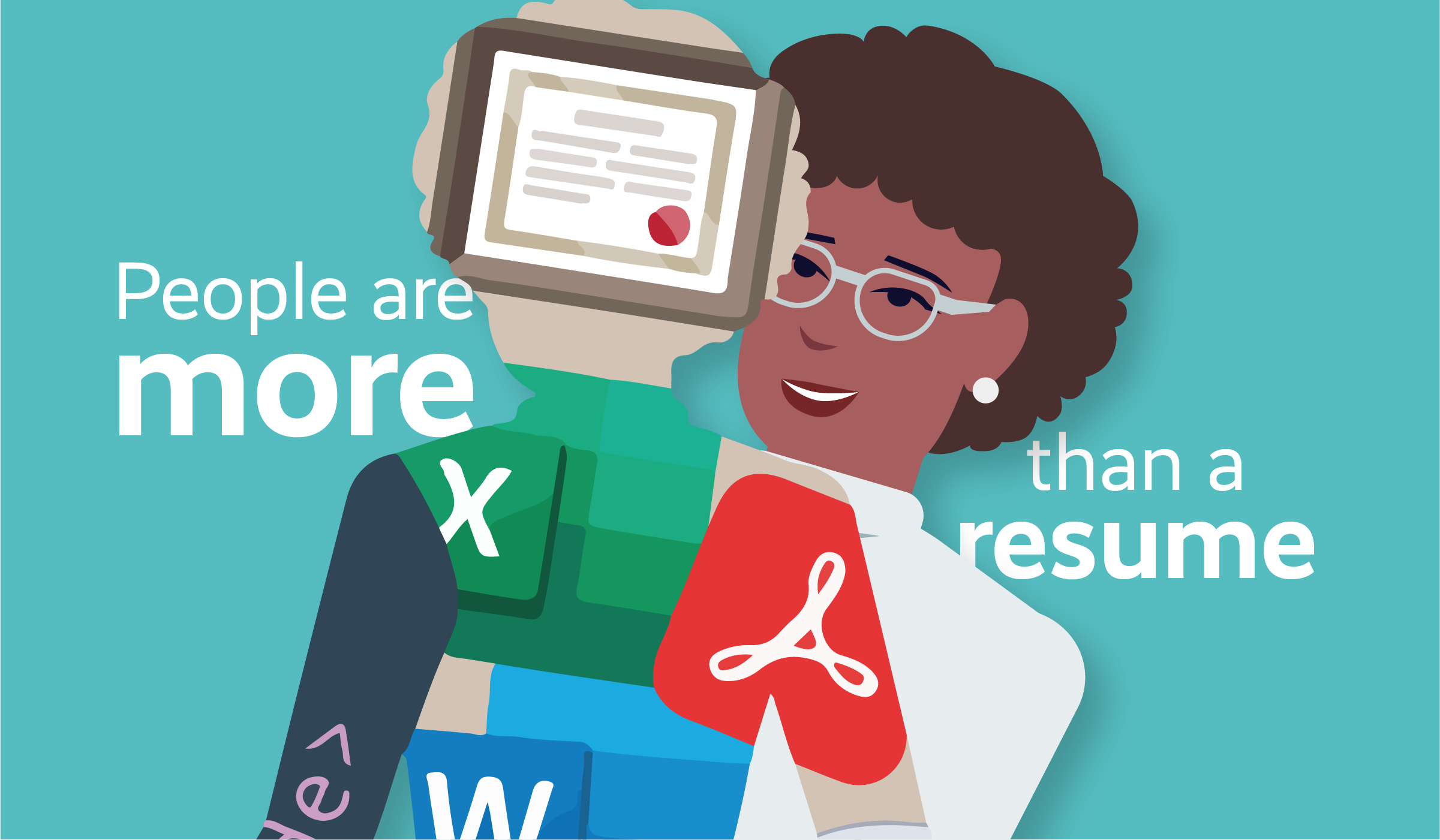 For decades, employers have placed emphasis on an 8.5 x 11 document to find their next great hire. The resume format may have evolved over the years, but its role in making talent decisions has not.

If you've ever applied for a job, taken a resume workshop, or even googled "How to Write a Great Resume," you may have gotten all kinds of advice like keeping it to two pages max, using headlines, or throwing in key terms from the job posting itself to make yourself stand out right away.

According to Glassdoor, recruiters receive more than 250 resumes for a given position, but only spend 7 seconds or less screening them, primarily due to time restraints and urgent need to fill positions.

That's 7 seconds to decide whether a candidate should get an interview or not. If you’ve ever screened a document for 7 seconds, you know you don't catch much. So how can someone truly understand what a person can achieve in that little time? The short answer: they don't.

With an astounding 46% of newly-hired employees failing within 18 months, it's no wonder organizations struggle to fill roles or find out their newly hired employees aren't meeting their expectations.

The Problem with Resumes

The problem isn't that there aren't enough qualified candidates out there; it's that employers' definition of what success is often gets in the way of finding the best people for the roles. Although resumes provide a lot of information about a candidate, they alone aren't predictive of performance or reflective of a candidate's true potential because they are built on historical data and riddled with bias.

According to a study conducted by the National Bureau of Economic Research, candidates with ethnic names are 50% less likely to receive interview callbacks. Biases can also appear when recruiters consider schools, addresses, job titles and years of experience during the screening process.

Focusing on factors such as job titles, where someone went to school, or the years of experience alone doesn't predict on-the-job success; instead, it triggers assumptions about a person's capabilities and worth and introduces socioeconomic bias. Not to mention it reduces diversity in your talent pool, as women and minority candidates generally have less experience than Caucasian males.

A Harvard Business Review study found that 82% of jobs ads stated a strong preference for job experience but no correlation between an employee's prior work experience and performance in a new organization.

It's often a misconception that having similar experience in previous jobs will save employers time and money in training the new hire because they can build on their existing knowledge of the role. They don't account for whether that person has the skills, motivation, and ability to adapt to the new environment and learn the skills needed for the job. Just because someone knows how to do something doesn't mean they're good at it.

Not restricting candidates based on past experience and other historical data opens the door for recruiters to instead focus on their potential and what they can accomplish if given the opportunity.

According to LinkedIn's Global Talents Trend Report, 89% of Talent Acquisition professionals reported that when a new hire doesn't work out, it's because they lack critical soft skills. Hard skills can be learned, improved or diminish as time passes. But, the soft skills people possess such as teamwork, communication, adaptability, and innovation are significant indicators of a person's capabilities, as they are inherent qualities people have and come naturally to them. They define who we are, how we interact and contribute to a company's culture.

Soft skills can be hard to assess on a resume or in traditional screening processes. Using talent assessments like Plum that use the predictive power of psychometrics to measure soft skills and reveal a candidate's potential can help managers and recruiters make better and objective talent decisions. By quantifying job fit, Plum surfaces top-performers whose skill sets set them up for success on the job.

When recruiters and hiring managers only focus on hard skills and work experience, rather than a person's potential and soft skills, they are more likely to miss out on hiring someone who will excel in a role and help the organization thrive.

So, instead of looking at the past, we challenge you to look forward and look beyond resumes to find your next great hire. Plum can help. Chat with us to learn how.

This entry was posted in Blog . Bookmark the Permalink

10 HR Podcasts You Need to Listen To

Internal Mobility Starts With Knowing What Drives and Drains Your People